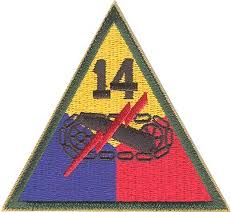 The 14th Armored-ReCreations headed west for Veteran’s Day in Branson.  Mike, Matt, April and I made the 528 mile trip.  Jon and Ron went from St. Louis.  Ron Grasso and Micki came from Memphis.

The event turned out to be secondary to our maintenance responsibilities.  On the way to St. Louis we found out that the semi truck was  just outside of St. Louis and had a leaking radiator.  Make a U turn and go home?  Nope, we went and fixed it.  The night was cold, tools were scarce, and the hot chocolate only came in small cups. The radiator was huge.  And heavy.  Despite the less than favorable conditions we fixed the truck, but only after taking the radiator frame to Jon’s shop to drill out some stubborn bolts.   Our journey to Branson continued without any further breakage.  Our car arrived just in time to check into the hotel and make it to the battle site before the morning safety meeting, Ron and Mike showed up a few hours later with the armor, but the first battle had already started!!!

I crewed Robert’s WC-52 and tended to some wounded.  The next battle our full force was ready.  We brought B-4, a jeep with a 37mm cannon, and the scout car.  A M16 halftrack was also present and looked pretty good.  As usual Robert’s WC-52 was a workhorse, towing his 57mm and running troops during and after the battle.   The allied forces included some Russians, British, and American troops.  With an excellent defensive position the Germans held out for a while but eventually folded to the allies.  The pyro for this event was excellent.  Plenty of huge charges were placed all over the field, great job from the guys at Premier Pyrotechnics.

The next day we participated in a large parade that snaked thru the heavily populated streets of downtown Branson.  Most re-enactors stayed around and made the parade.  After loading the equipment everyone set out for home but Matt’s car had other ideas.  Just minutes from the highway we heard metal dragging the pavement, a broken tie-rod!  More maintenance.  Ron Grasso came back and made several runs to the parts store while we replaced not one, but both of the outer tie-rods.  Anyone want to ride with Matt?  That was the last of our excitement, another successful event for the 14th.